Blog - Latest News
You are here: Home1 / Art & Culture2 / #انتظار A BOOK LAUNCH AND AN OPEN DISCUSSION ON CRITICAL THINKING AND R... 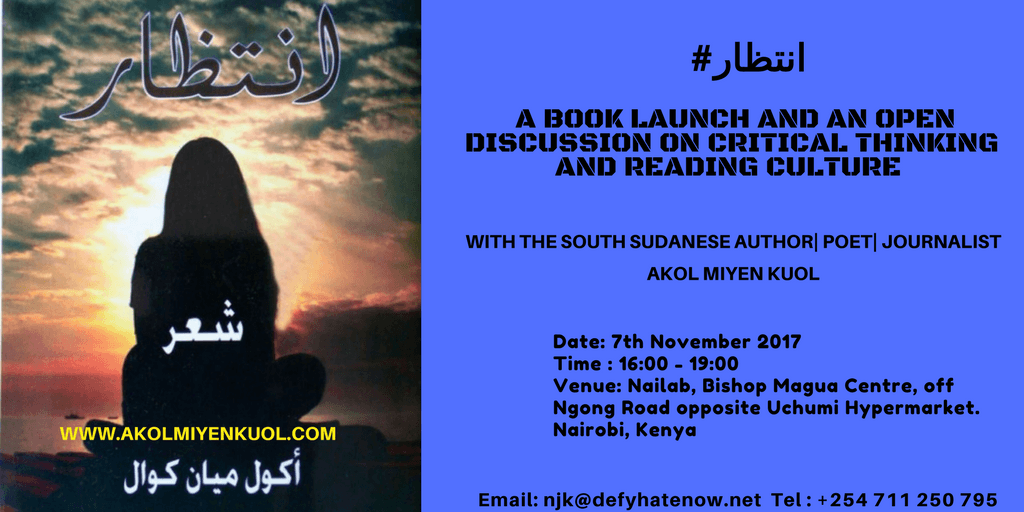 It is our delight to be hosting the renowned South Sudanese poet and author Akol Miyen Kuol for the second time this year, Akol will be launching his poetry collection
#انتظار and engage with the audience in an open discussion on the role of critical thinking and reading culture in South Sudan.

Akol Miyen Kuol is an author, poet, and journalist commonly known as Akoldit. He was born in 1974 in Thurkuruk village in the oil-rich region of Abyei, South Sudan. Due to the continuous political instability in Abyei, he deserted the region in 1978 and underwent studies in northern Sudan.

The author has published two collections of poems titled ‘The Sun Will be Rising’, 2001 and ‘The Last Train’, 2003, as well as an analytical book entitled ‘A Case for the Capacity of South Sudanese to Rule Themselves’, 2009. ‘Sudan: Understanding the Oil-Rich Region of Abyei’, which was first published in 2011 is Akol’s fourth book. He also published a paper in 1997 in Cairo, Egypt entitled ‘The Obstacles of Creativity in South Sudan’, in which he proposed among other recommendations, a confederation system as a solution to Sudan and South Sudan problem.

Akol is married to Christine Nyanakol Gordon Riak with whom he has three children, Mijak, Nyenawut and Kuol (Mandela, Jr).

#defyhatenow seeks to support those voices acting against the conflict to go ‘viral’ within and outside the country – bringing the South Sudanese diaspora into the online peacebuilding framework, bridging gaps of knowledge and awareness of social media mechanisms between those with access to technology and those without.

How Identity informs opinions in South Sudan, an open discussion by #defyha...
Scroll to top