You are here: Home1 / #defyhatenow_Cameroon

The #defyhatenow initiative works on providing community-based and data-driven solutions to the problem of hate speech, disinformation and misinformation. Our work focuses on creating a framework for increasing trust between stakeholders through mobilising civic action against all forms of hate speech and incitement to violence, including disinformation created via the Covid-19 pandemic.

#defyhatenow Cameroon seeks to support the voices and actions of citizens working against online-induced conflict within and outside affected regions by bringing youth, community leaders, grassroots organisations and further civil society stakeholders into a peace-oriented media and information literacy framework. Bridging gaps of knowledge and awareness of social media mechanisms between those with access to technology and those without, #defyhatenow is a growing network of online and offline peacebuilders.

The project is implemented by Civic Watch, a community-based organization registered in Cameroon as a non-profit youth led organization. Civic Watch acts as an intermediary organisation for schools, civic debate spaces or separate public/private organisations for learning and exploring questions of participation and accountability of locally elected officials. Its main goal merges with the initiative’s mandate, which is community mobilisation to counter hateful rhetoric among young people both online and offline.

Technology helps create predictive models, which can better understand how an emergency or disaster will impact the area. Understanding and viewing the prediction makes it easier to create an effective plan of action that addresses the concerns that the predictive model brings to light. We work with technology to help manage emergencies and disaster situations to help lead to more effective advances and innovations in conflict-prone areas. We aim to facilitate emergency response agencies to resolve threats in a timely and comprehensive manner.

We work with organisations that use art, campaigns and nonviolent activism to promote and intervene in social and political reforms with the desire to make changes in society toward a greater good. We build strong relationships with peacebuilders and conflict mitigation experts to strengthen nonviolent action and peacebuilding efforts. 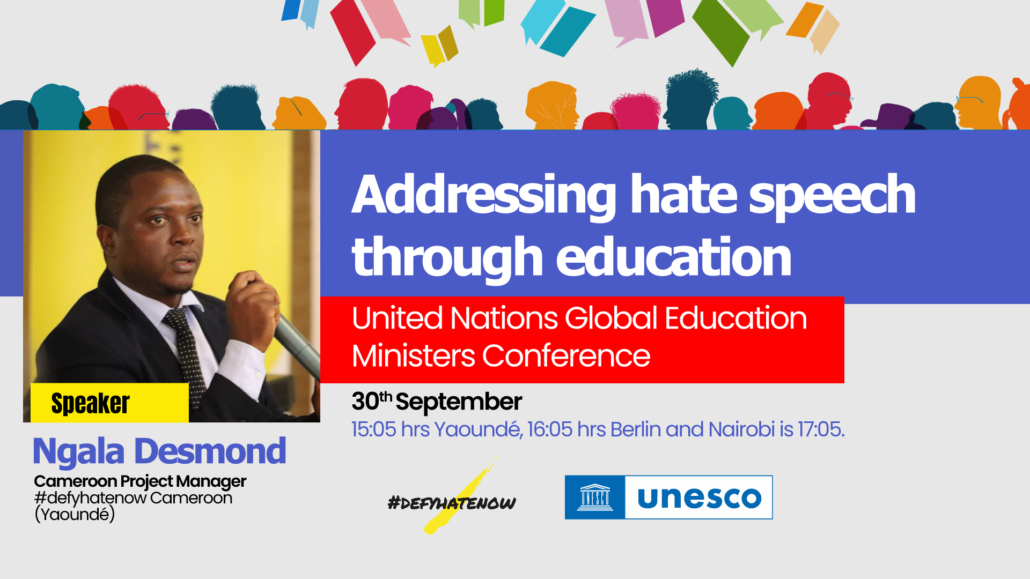 Public policy is essentially a government decision undertaken to pursue a specific goal or objective which may or may not be enforceable at the central, state or local level of governance. Policy-making is a dynamic process that is changing dramatically with the increased involvement from different stakeholders. For meaningful public policy, there is a need for input from the public. We work with institutions that work with the public for participation, thus providing communication between government agencies making decisions and the public.

Another way of ensuring that people’s voices are heard and determining policy-making that we employ in our work is activism and advocacy. 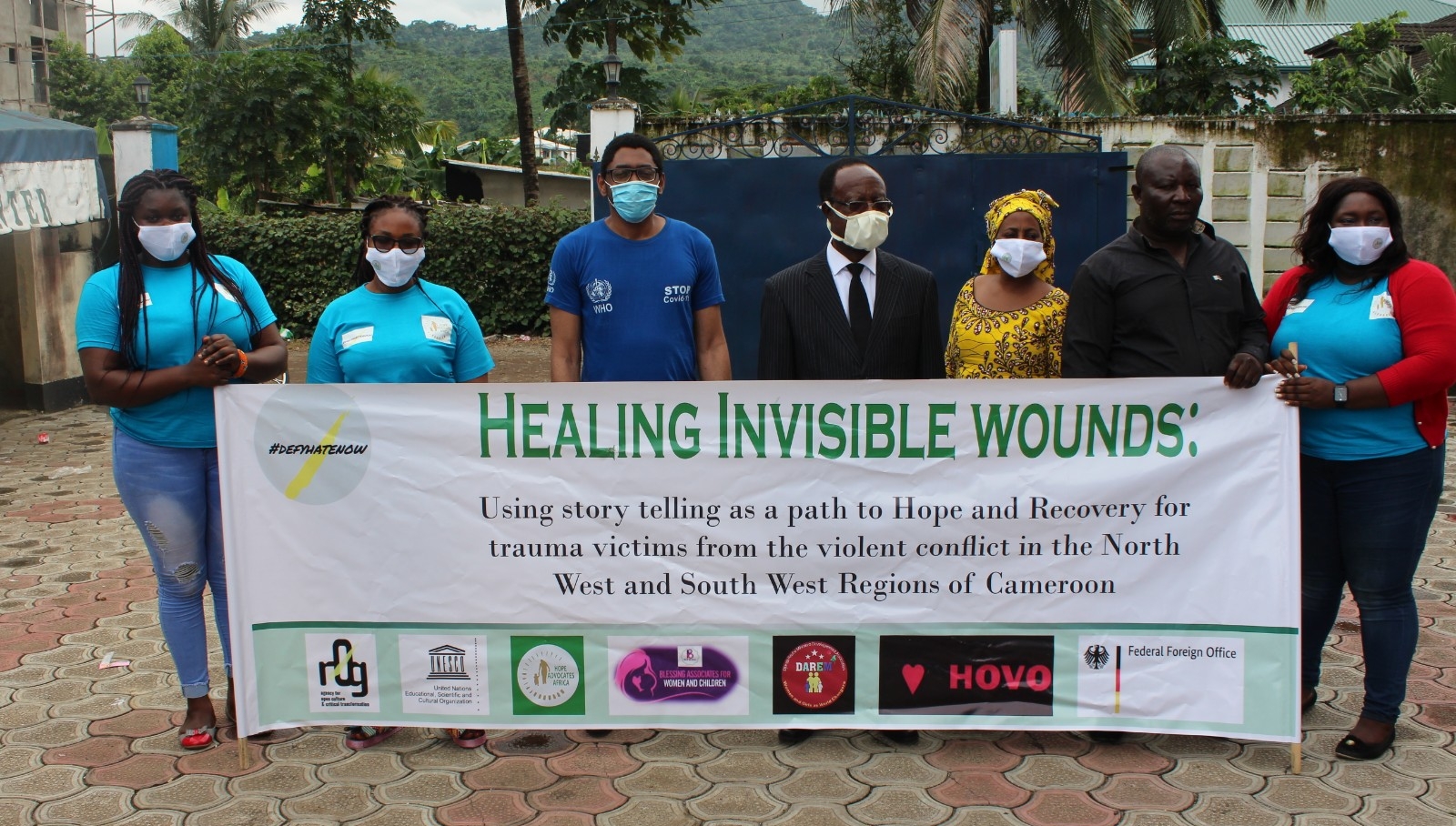 Going through extraordinarily stressful events more often than not leads to lasting emotional and psychological trauma. Our work in conflict mitigation might help alleviate the immediate sources of the trauma, but time does not necessarily heal all wounds, and so post-trauma stress is quite common. We work with institutions that help individuals who have gone through trauma that may have been caused by rape, domestic violence, experiencing/witnessing an act of violence, among others, cope with the events that come with it.

These institutions include and are not limited to learning institutions that work with women, youth and children.

We use data to contribute to peacebuilding efforts with a specific focus on social media platforms, capacity building, and tech policy. We work with institutions to help them utilize technology to strengthening their peacebuilding capacity. Some of our work in this field includes; Fact-checking training programs for content creators,  Fellowships for journalists on fact-checking and data journalism, Data Visualizations and Digital rights, policy, & advocacy.

The Field Guide offers tools and strategies to be used by community-based organizations & online campaigns for peacebuilding. This is the second version of the Cameroon Field Guide that incorporates more context from the lessons learned from implementing the project over a two year period.

Divided into six chapters that cover a specific aspect of the conflict and peacebuilding process, the field guide acts as a base of action on media-induced hate speech awareness to tackle conflict, support media literacy and address issues of migration and displacement. 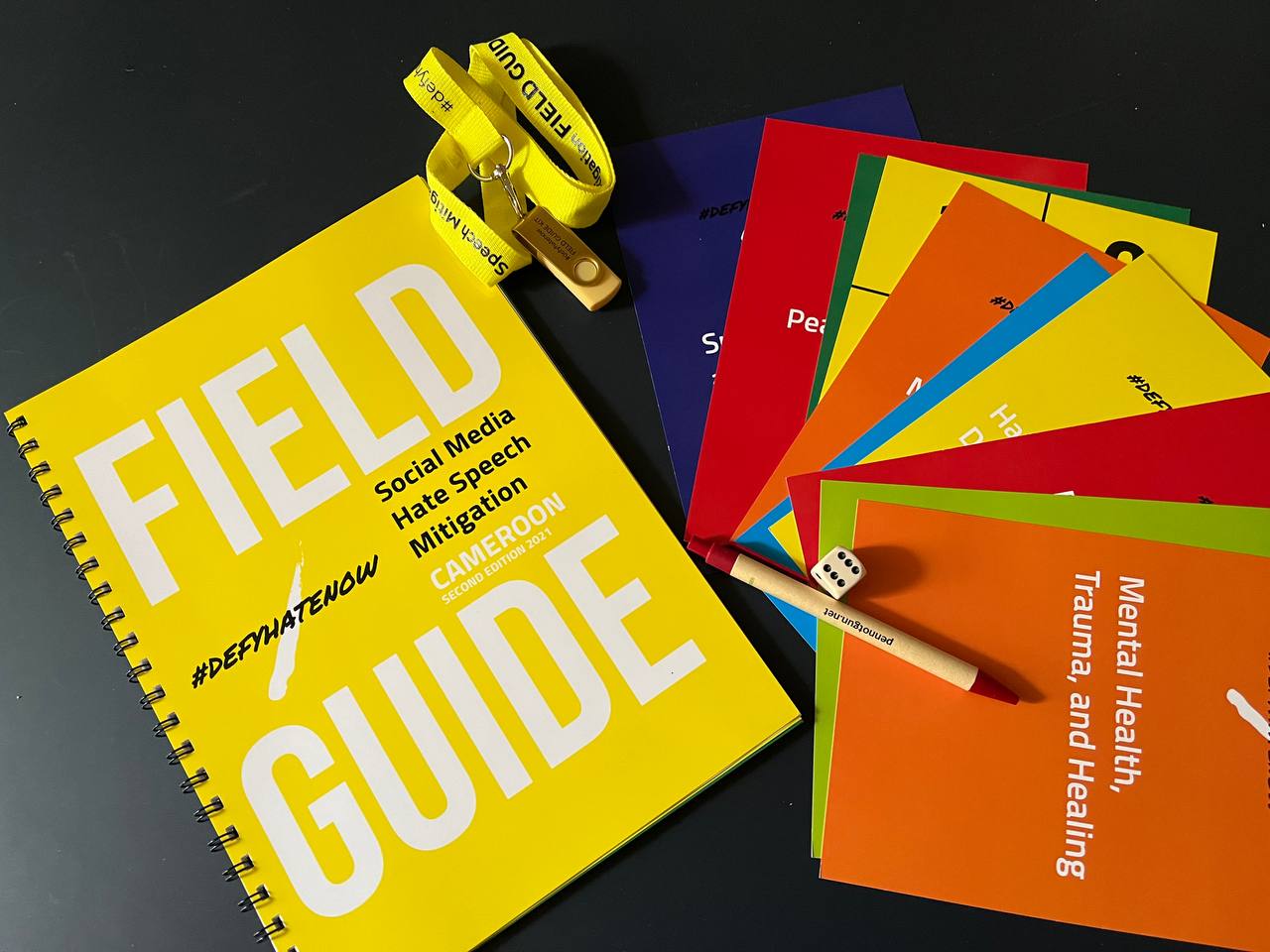 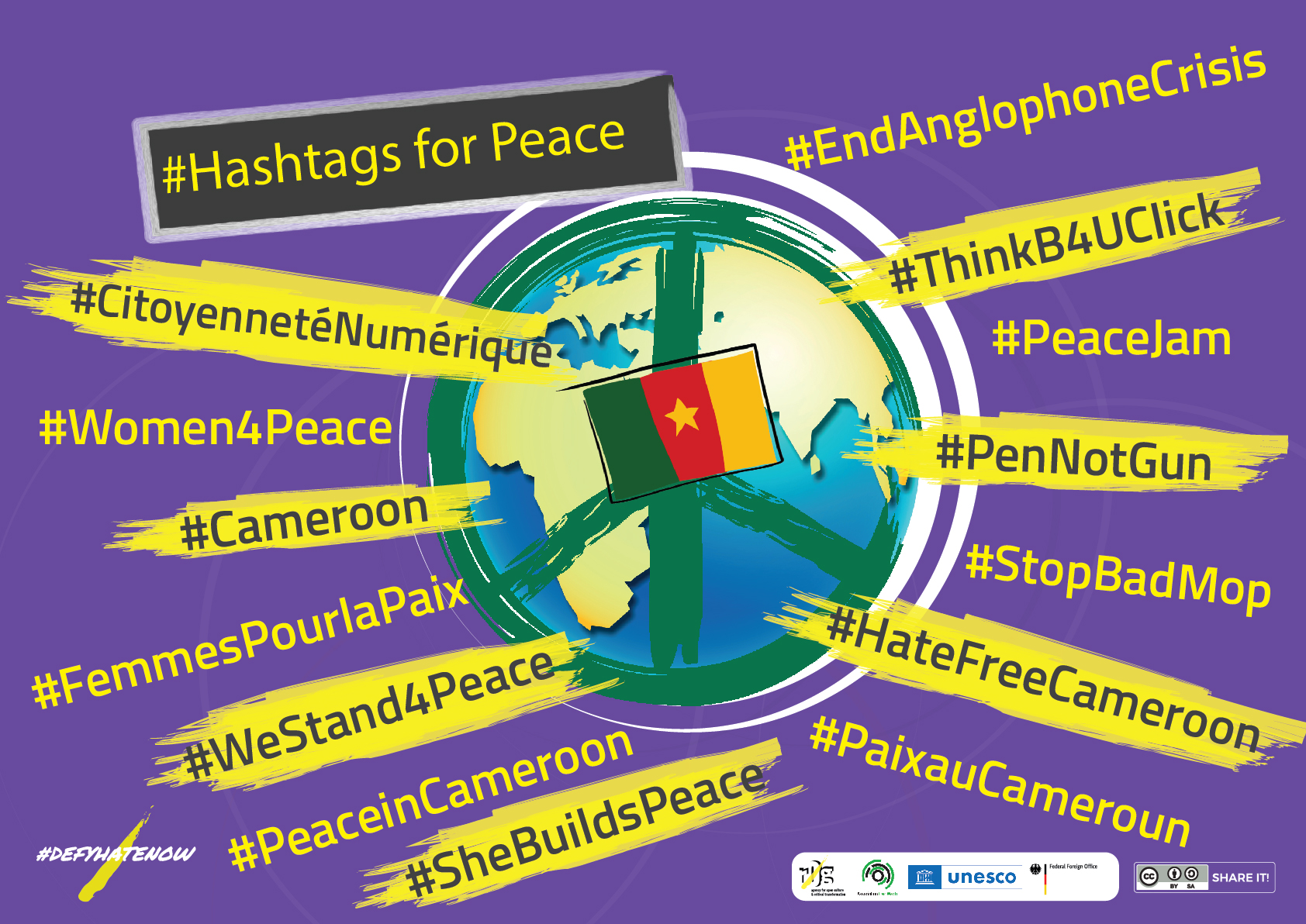 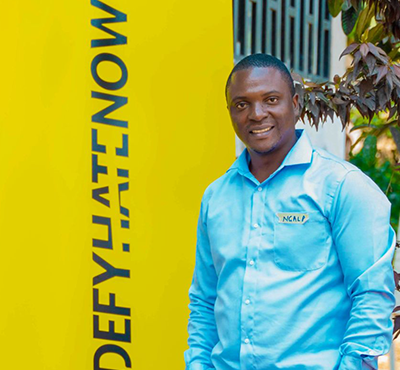 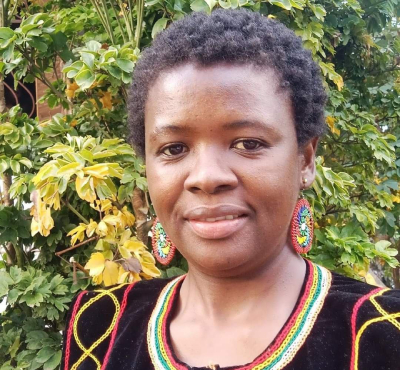 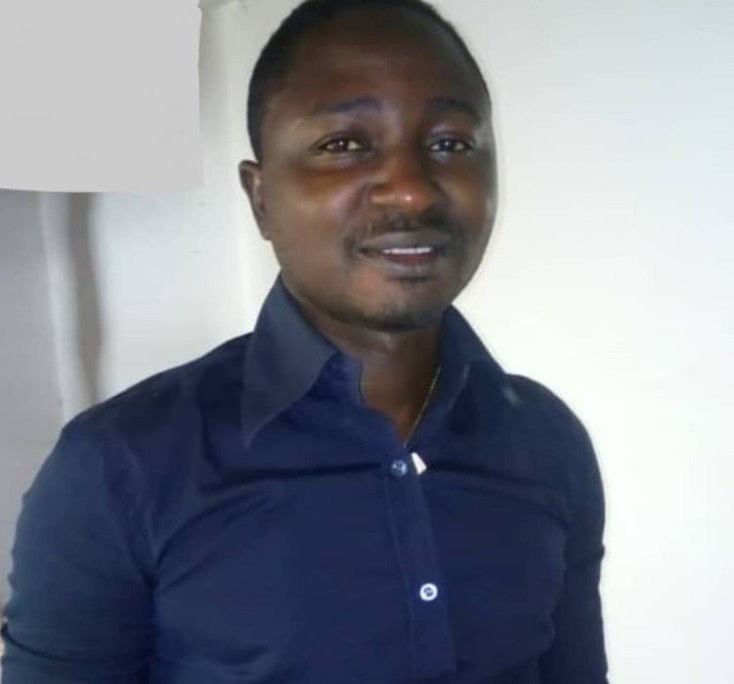 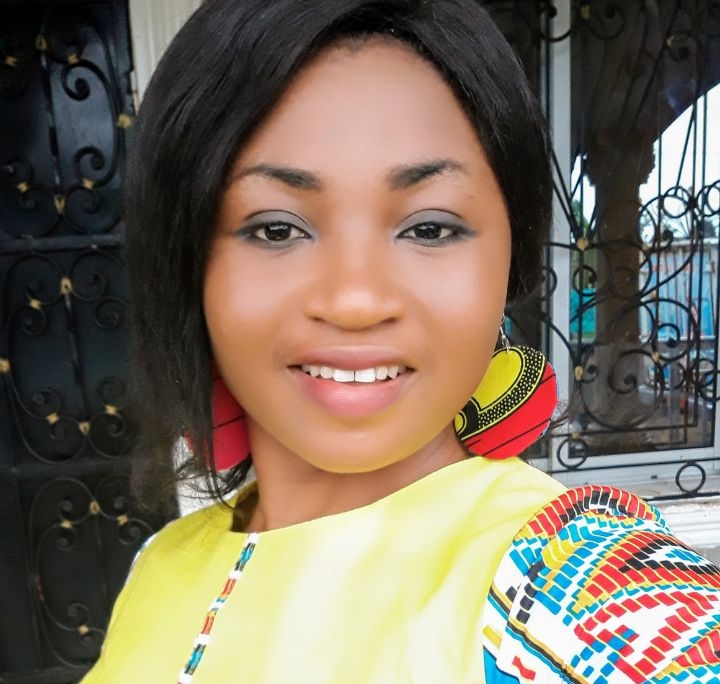 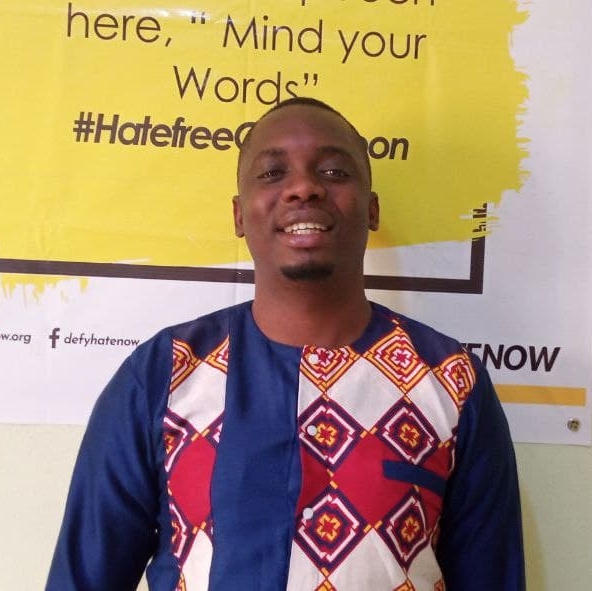 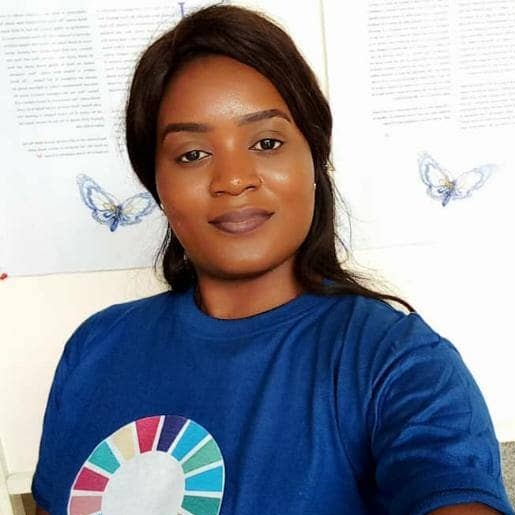 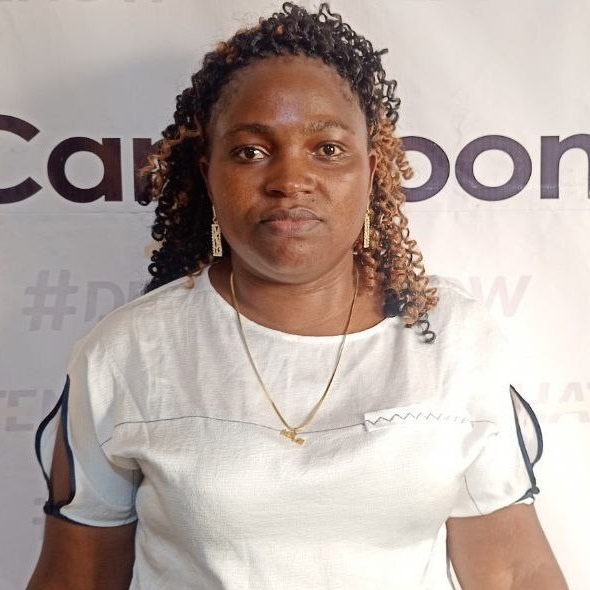 Get in touch with #defyhatenow Cameroon