Blog - Latest News
You are here: Home1 / News2 / I am Maura Ajak, I report on gender-based violence in South Sudan 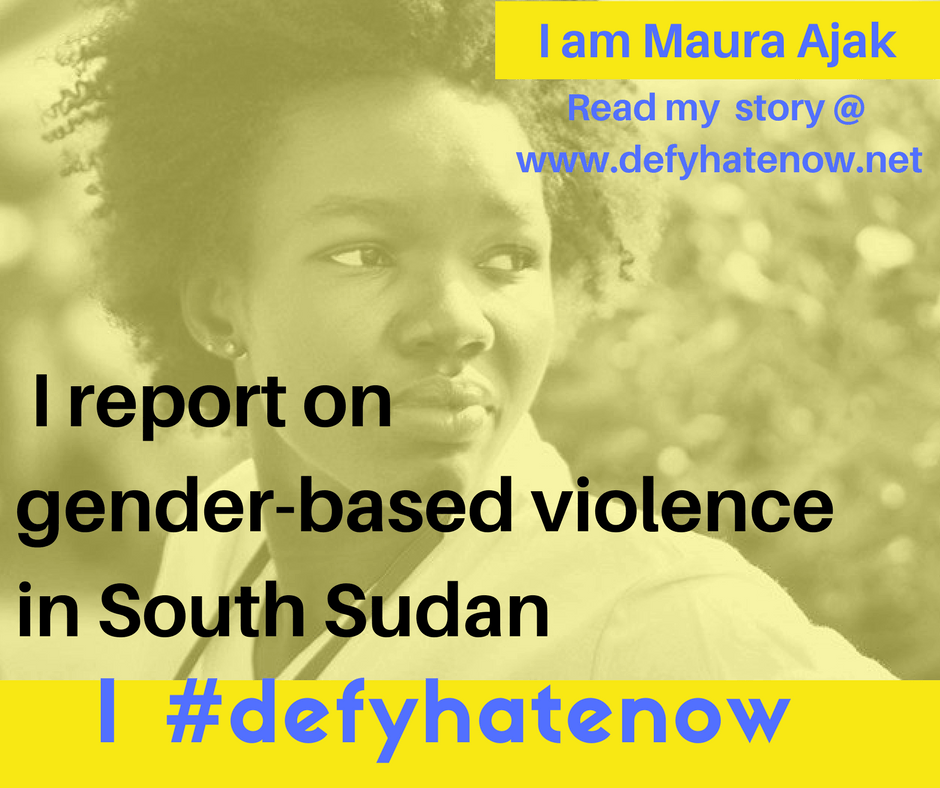 South Sudan will be rebuilt by the South Sudanese people. Everyone is passionate about building a little piece of their South Sudan and impacting the country in their own little big way.

This is the first article in our “I #defyhatenow “series. we will be featuring South Sudanese citizens talking about their daily lives and how they defy hate and opt for peace through their work.

We caught up with the courageous Maura Metbeni Paul Luigi Ajak, an award-winning reporter working for The Catholic Radio Network in Juba, South Sudan.

Here is our chat:

Have you lived in South Sudan all your life?

I was born in Wau but I grew up in Khartoum, Sudan. I came back to South Sudan in 2008.

I started my studies in Khartoum, where I did both my primary and secondary school certificate at  Combonian Catholic Schools.

What inspired you to become a journalist?

I have witnessed a lot of gender-based violence. I have heard of massive rape done by uniformed men where women/girls are randomly raped by two or three men at a go. Underage girls between the ages of 11-15 are gang raped like they are toys to play with. They lose their innocence and are scarred for life because of such experiences. Being a woman in South Sudan I knew I had a voice and an opportunity and I knew I wanted to tell these stories, so that maybe someone can help. It was my way of helping my fellow women.

I also happen to speak both English and Arabic which helps in communication and reporting.

Tell me a gender-based violence experience you have witnessed.

One time, early in the morning at around 6:30 AM I heard a woman screaming, “HE WILL KILL ME, HE WILL KILL ME” I dressed in a hurry and I rushed outside. I found a husband beating his wife with a black leather belt, at first I thought it was the guy who sells water as the whips sound similar when applied to a donkey. Looking closer I saw a woman wailing and a man hurling insults at her while beating her, as the men surrounding them watched laughing and encouraging the husband.

Our neighbor grabbed the leather belt and shouted at him to stop it. That’s when everyone left in a hurry. As a woman there was nothing I could do to stop him. I stood there and painfully watched because if I dared to interfere I would be harassed endlessly but it was painful to stand by.

Has someone been violent towards you directly?

Not physically, just verbally and mostly from men. I think for just being a woman with a job and also being a journalist is enough to warrant some form of violence here.

Most of your work is based on human rights and transparency issues and South Sudan, why is that?

I am a woman and most of the cases concerning human rights violations involve women being abused in one way or another. Not many people want to talk about these issues but they need to be told openly to the world.

Underage girls and women who are gang raped need someone to tell their stories to, even if it’s anonymously. I had a case where a girl had been brought to the hospital by the Bishop. She had been gang-raped; her clothes were soiled and bloody. Her body was swollen; she was crying and was inconsolable. I was so angry and bitter with the world. If I was alone I might have punched the air to release the tension but I remained calm because I had to do the story and give that girl strength.

What challenges do you face because of your work?

It can be scary especially in South Sudan but I like my work so I always ensure I get my information from trusted sources to avoid complications. It’s also hard to gather sensitive information, especially when it is fresh so I give it time to cool down then I start digging for information afresh.

You have been recognized and awarded for your reporting on transparency and gender issues in South Sudan;  how did that feel and what does this award mean to you?

I really felt honored, it is a lift up stage for me to do more as a human rights defender. The award has given me the courage to bring up the unheard voices In terms of issues that considered a taboo in some communities.

What are your hopes for journalism in South Sudan?

I hope we have an institution where journalists can gather and get updates on the happenings routinely. I also hope we have a space where human rights issues and sensitive issues e.g conflicts and gender-based violence can reported with the openness they deserve.

How do you think  South Sudanese nationals can use social media to defy hate and preach peace?

We should feel free to share our experiences in a way that impacts the world positively. Childhood stories, old stories from our ancestors and day to day stories showing the progress and steps we have made as a country. These stories would help to achieve peace by creating awareness about the consequences of war.

What would you tell anyone reading this?

No one thrives in war. Most people love peace and peace begins with you and me. Let’s not incite each other and especially with this era of social media let’s thrive to preach peace. #defyhatenow

This interview was conducted & written by Kendi Gikunda  . The opinions expressed in this article are the Interviewee’s own and do not necessarily reflect the official policy or position of #defyhatenow.

Mary Apollo on the role of diaspora based journalists in promoting peace in...
Scroll to top