Blog - Latest News
You are here: Home1 / Board of Trustees2 / Lupai Samuel 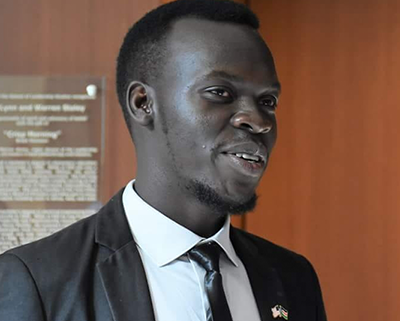 Lupai Samuel Kenyi Stephen is the Founder and Executive Director of I AM PEACE Initiative, a  youth led Non-Government Organization which operates in the refugee areas of Uganda and in  South Sudan, with a focus on peaceful co-existence by empowering young people to be agents of  positive change through media, arts, and community outreach programs. Lupai has over 7years experience in radio broadcasting where he worked as a presenter, producer and music director in various radio stations including Eye Radio, City FM, Capital FM, Classic FM, Voice of the People radio (all in Juba) , and Radio Amani (in Adjumani-Uganda). He’s part of numerous charity events in South Sudan and Uganda.

He is a 2018 Mandela Washington Fellow, a program under the flagship of the Young African Leaders Initiative where he completed his Civic Leadership training at Kansas State University, Kansas, and his internship at the United States Institute of Peace (USIP) in Washington DC. He is  also a Generation Change fellow, a USIP Youth exchange program with the Dalai Lama. Lupai, through his media experience, is a public speaker, an events’ host (MC), and a moderator.