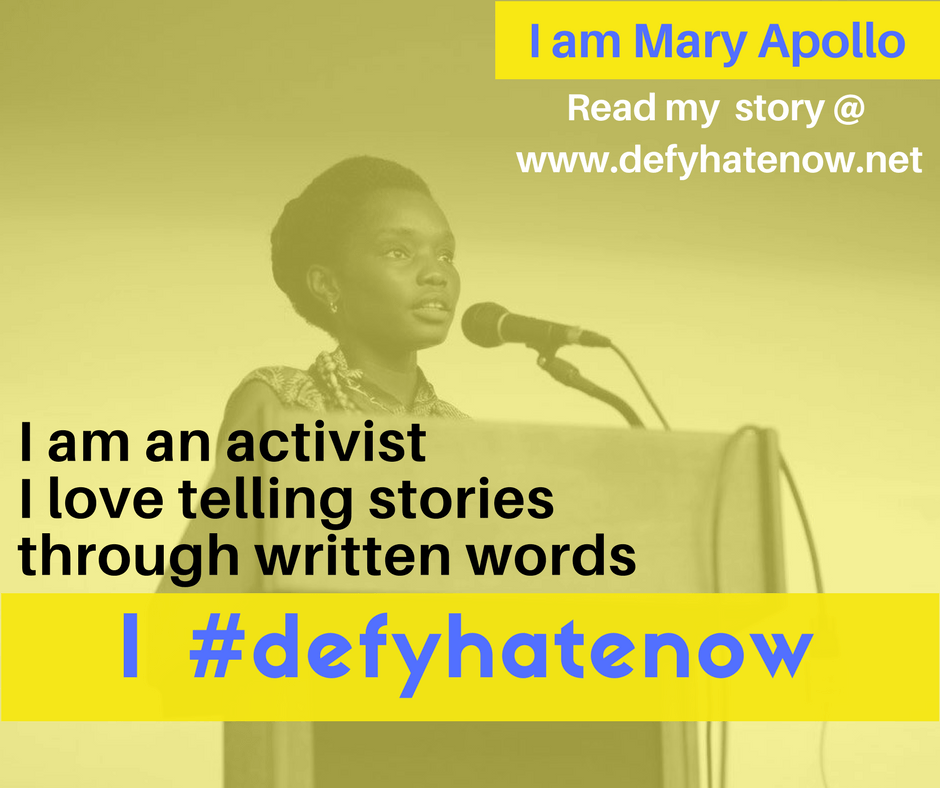 The role of Diaspora based journalists promoting peace in South Sudan.

We had a chat with US-based South Sudanese journalist Mary Apollo, an Atlas Corps fellow talking about writing and the impact of the Diaspora community in building a peaceful South Sudan.

How do you describe yourself?

I am an activist and I have a relationship with words. In short, I love telling stories through the written word (fiction and non-fiction). I have six years experience working with NGOs.

When did you start your writing career and what inspired you?

As soon as I could spell, I could write. Growing up I read a lot – I still do – and this led me to the Faculty of Arts at the University of Khartoum where I studied Psychology and Mass Communication.

After I graduated in 2010, I worked so hard to get some of my writing published in a newspaper. I got a chance for training in one of the local newspapers in Khartoum, Sudan in the news department.

I wrote about the women who have been facing violence in my society, issues of identity and citizenship, cultural issues and political affairs.

Do you remember the first story you did?

The first story I wrote was about a woman who was abused by the Sudanese government. She was in prison. It’s still a difficult story for me to remember. There is a story I wrote that was very personal to me. It was titled “My Cousin Venus,” and was about my cousin who is struggling with her identity. She is fourteen now. She hates her complexion and her hair texture. She has a complexion I would describe as ebony and it’s very beautiful but she felt out of place, as she was described as a black slave. Most of her classmates and teachers were lighter and had softer hair so her mother had to change her school which didn’t help much. You would think being an African in Africa one is accepted for who they are but “colourism” is more pronounced around here. This would easily lead to skin bleaching in the future. I look forward to the day she will feel comfortable in her skin and hair. While writing this story I talked to my grandmother who was very keen on giving me details on the South Sudanese social lives including identity issues people face.

You have lived in more than one country and you have very international experience, what inspires your writing? Whom do you look up to when you write?

I was born, grew up and went to school in Khartoum, Sudan. Apart from my mother tongue, I speak Arabic, English, and French. I studied in Arabic and I have learned the other languages growing up. I have an easy grasp of languages so this makes it easier for me to communicate.

My family inspires my writing as they are part of my first experiences. I draw from my experiences as a little girl growing up in a politically unstable country. I also try to identify my experiences with the people I meet and friends I make in every new place I visit. I read a lot of Chimamanda Ngozi Adichie’s work; she inspires me with her creativity and fearlessness.

You were a fellow at Atlas Corps, what has your experience been like?

I was attending an “Atlas Corps Fellowship”. It’s a leadership training which brings leaders from around the world to be trained and go back and serve in their countries. I worked in Results foundation in the microfinance department. I wrote projects, finalizing reports for the microfinance team and writing blogs.

I loved every minute of it. It has created better chances for me and shown me the impact of teamwork and a peaceful coexistent.

Tell us more about being a South Sudanese journalist based in the US?

Living in the USA is very different from South Sudan. Life here is fast and different. You are opened up to so many cultures and types of people. Voices here are loud and demand an ear. Career life is also exciting and tough all at once. As an immigrant, you must work twice as hard to prove yourself because you went to school in a different system. You also take every shot you get because the competition is so much more. You also suddenly start dealing with a lot of documentation because you do not want to be on the wrong side of the law.

The contest of writing is new and you begin having new personal experiences. This informs your writing. The audience is also different. In South Sudan, while maintaining the facts there is a need for more details in news or stories. Our speeches are longer. In the USA news and stories are brief but still factual and speeches are shorter.

They cheer you on louder in South Sudan maybe because we are a young country and we are eager for information. In the USA there are many who do what you do, as much as there is support you have no voice cheering you on apart from your inner voice. There is an absence of information about Africa in general here. I have learned this from the questions I get asked. I wish people read more about Africa and particularly South Sudan but I have learned to be gracious and patient in answering all the questions.

What do you think is the impact the Diaspora can make in building a sustainable and peaceful South Sudan?

Some people on social media and not just in the Diaspora use social media to spread “hate speech”. This is because everyone has their own channel to share their thoughts on. Be it Facebook, Twitter, Snapchat, YouTube or Instagram it’s easy to share opinions now. Everyone has a role to play on how they use the channel they prefer. It’s upon every one of us to use our voices to preach peace and not fuel hate.

I did a live Facebook video to ask people to refrain from spreading hate on social media as it’s like petrol on a fire. It’s so much easier to spread hate via the internet than through any other channel, you reach a larger audience faster.

I think it’s the role of every single South Sudanese on social media to preach peace and ask everyone to #defyhatenow.

How do you think the South Sudanese Diaspora community can use social media to defy hate and preach peace?

They can do different kinds of social campaigns. They can also support causes that support their local community but most importantly they should be very cautious with what they post on social media.

What are your hopes for journalism in South Sudan?

What would you tell anyone reading this…?

It’s up to you to hold yourself to a higher regard in terms of maintaining peace. You are not just a drop in the ocean; you are the drop that makes the ocean calm or creates a storm. It’s the same case when it comes to social media, are you creating peace or fueling hate speech? #defyhatenow

This interview was conducted & written by Kendi Gikunda . The opinions expressed in this article are the Interviewee’s own and do not necessarily reflect the official policy or position of #defyhatenow.

I am Maura Ajak, I report on gender-based violence in South Sudan