A #peacejam can be a social gathering, it may be based on existing types of gatherings, dances, theatre, songs or improvised forms of collaborative action.

Anyone can join the social media #peacejam on Sept 21st, by attending an event or simply by sharing your own peace messages online with hashtags #defyhatenow & #peacejam17. Photograph your #peacejam messages, create gifs or quotes and upload to social media channels – blogs, instagram, facebook, twitter, whatsapp.

Hashtags need to be all one word, with no spaces to show up online as social media activism and allow monitoring of their reach, impact and engagement.

Using #peacejam17 and #defyhatenow hashtags on your social media posts will help track the broader South Sudanese use of online channels for positive cultural change, and to gain a better understanding of the social media peace landscape.

“We sometimes forget that our online voices reach a wider audience than just our friends. #defyhatenow is reminding South Sudanese nationals that we need to continue working together to make the online spaces we inhabit more peaceful and tolerant. We are not just citizens of our respective countries, we are global citizens, and in a minute your online message could help bring peace or exacerbate conflict in the world.”

Culture jamming is a tactic used to disrupt or subvert media culture and mainstream cultural institutions, using mass media to produce ironic or satirical commentary about itself, often subverting the original medium’s communication method. Memes & gifs are contemporary culture jamming tools that bring new understanding or angles to a particular theme or idea.

Blending ideas of a music improvisation (jam session) and culture jamming, #PeaceJam is an informal, community oriented peacebuilding event, process or activity where anyone interested in peace and cultural dialogue can get together in person and online to share their ideas, visions and hopes for the future – and to make new friends and connections. A #PeaceJam may be based on agreed actions or ideas suggested by participants, or may be wholly improvisational.

To “jam” for peace is to improvise peacebuilding without extensive preparation or predefined arrangements, but to develop new ideas and ways of doing things spontaneously with the energy coming from the creative interaction of the participants. The #PeaceJam17 host acts as a “conductor” bringing different performers, activists and others together, to focus on all manners of peacebuilding, with individual ideas, slogans and connections to others online while using, and learning about social media.  #defyhatenow #Peacejam17 supports South Sudanese citizens, youth and civil society to occupy the global social media landscape with peacebuilding, taking action against hate, conflict and incitement to violence.

What can everyone of us do to promote peace?

What does peace mean to you?

What are the symbols of peace in your culture / community / family?

How can peace impact our communities?

Peace is like change, it starts within, so let’s get to work everyone!!

We will use music, drama and sports as a way of getting the young and the old to laugh, cheer and listen to messages of peace. Speakers include representative from #defyhatenow, peace activists, and representative from the German embassy. The day ends with a basketball match of mixed boys and girls teams.

We hold a Marathon for 10 teams (5 for kids and 5 for adults), then peace messages, dramas, songs, poems and more. Communities on/offline share ways of bringing peace home together.

The #PeaceJam in Torit will gather youths from communities in Eastern Equatoria to spread the culture of peace through drama and traditional performances (dance/music). The workshop shall engage participants with an introduction to understand the impact of online hate speech and incitement to violence, followed by a focused discussion and idea sharing on practical ways that community and youth leaders can engage in countering hate speech and mitigating incitement to violence in their communities, both online and offline. The outdoor event brings this message to the rest of the community with performances from local drama groups, artists, and peace activists.

This year’s Peace Jam will feature performances by South Sudanese artists and poets to an audience of South Sudanese diaspora community in Nairobi. This informal event aims at bridging gaps between different communities by sharing different cultural experiences from South Sudan. Guest of honour will be renowned Abyei-born South Sudanese author and poet, Akol Miyen Kuol, also known as Akoldit. Akol will share his poem collection entitled ‘The Last Train’, referring to the August 2015 peace agreement. He calls on both men to ensure that South Sudanese citizens do not miss that last train.

#PEACEJAMRHINOCAMP: Yoro playground in Rhino Camp will be the central event location.

YSAT with support from #DefyHateNow and other partners will organise the #PeaceJam in Rhino Camp to bring young people together talking about Peacebuilding and raising awareness about how to avoid involving themselves in hate speech against their community members, tribes and colleagues. Drama, Poems and Music4Peace Concert will engage young people to make pledges of peace to #defyhatenow as they use social media responsibly in their daily life, and to create a platform to unite their efforts to fight tribalism, violence and hate speech online and offline with community led peacebuilding and intercultural engagement. Our target group are the local Refugee population in the 33 Villages of Rhino Camp with empathy to South Sudanese Youth, supporting their efforts to build peace outside their home country.

About YSAT: Youth Social Advocacy Team is a Refugee Youth led Community based organization working with and for Youth to engage them in peacebuilding, meaningfully empowering them to be change agents, SGBV activists, and successful entrepreneurs while connected with the global networks of young people.

Exile and diaspora groups are key actors in reducing the level and intensity of online hate, as South Sudanese living outside of South Sudan have a direct impact on South Sudan through social media. Diaspora communities are closely linked with civil society actors in South Sudan, facilitating solutions to the effects of social media hate and incitement to violence within the diaspora itself. We are interested in connecting with communities of the South Sudanese diaspora in USA, Canada & Australia to bring these questions into a wider discussion and engage with citizens to #defyhatenow.

“Together for Peace: Respect, Safety and Dignity for All.”

“We must resist cynical efforts to divide communities and portray neighbours as ‘the other’. Discrimination diminishes us all. It prevents people — and societies — from achieving their full potential. Together, let us stand up against bigotry and for human rights. Together, let us build bridges. Together, let us transform fear into hope.”

The Day will highlight solidarity with refugees and migrants and showcase the shared benefits of migration to economies and nations, while also acknowledging legitimate concerns of host communities. Ultimately, it will be about bringing people together and reminding them of their common humanity. 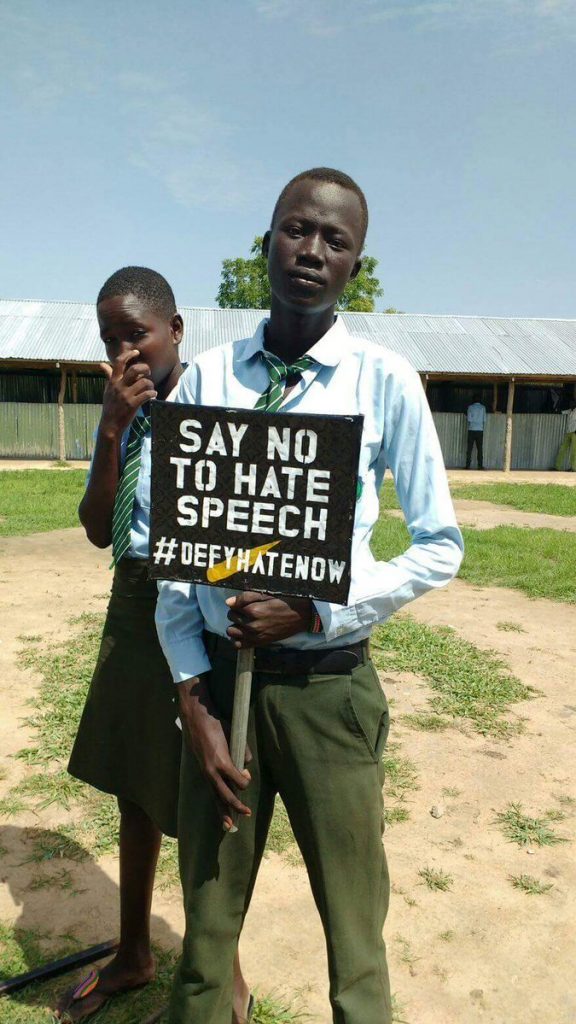 #defyhatenow is an urgent community peacebuilding, training and conflict reconciliation project aiming to support grassroots efforts to avoid media induced violence in South Sudan, through the vehicle of social media. We seek to enable those affected by the conflict to bring down the tone of online rhetoric, help the reconciliation process between their communities and develop a vocabulary with which to support ongoing peace and stability.

#defyhatenow responds to South Sudan’s ongoing civil crisis by addressing the roles played by social media users in exacerbating or helping to mitigate these issues, since the eruption of conflict in December 2013 and July 2016.

Our vision is to strengthen the voices and support the actions of youth, women’s and civil society organizations, peace activists and independent journalists in South Sudan to develop strategies to mitigate such scenarios, as part of a wider global ‘dangerous speech’ mitigation community. Also to create an awareness of the impact hate speech has in potentially fuelling conflict and how social media can be used in a constructive and peacebuilding manner.

#defyhatenow is funded by the ifa – Institut für Auslandsbeziehungen (zivik) with means of the German Federal Foreign Office (Auswärtiges Amt).

Bior Ajang “What is #SouthSudan if we are divided?”