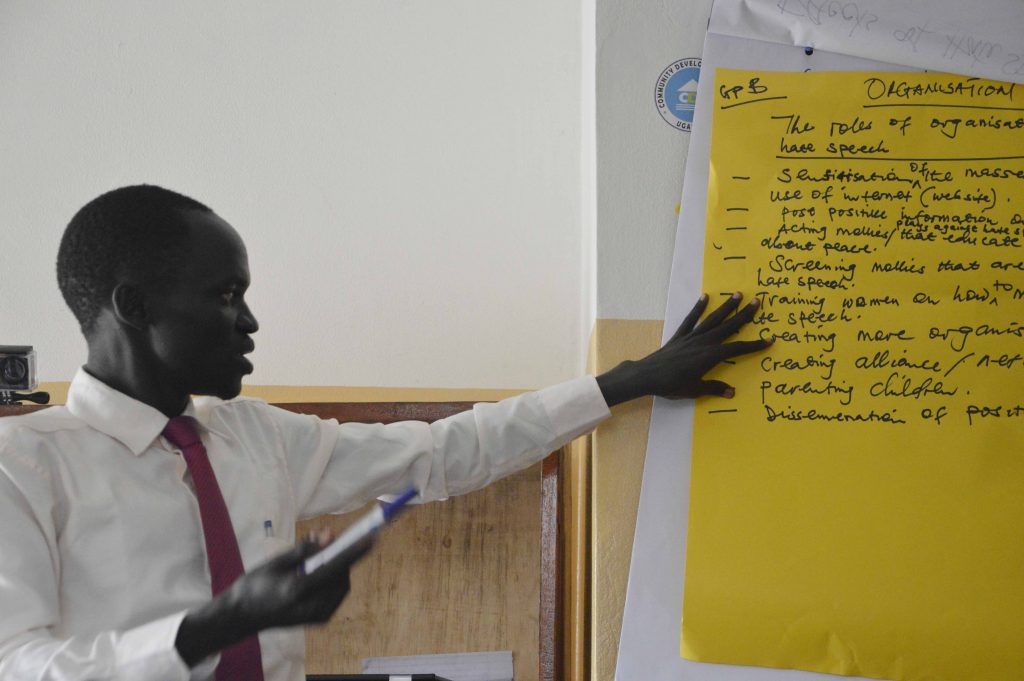 #Rhinotalks is a roundtable forum bringing together different actors and stakeholders from South Sudanese NGOs in Uganda, with journalists, refugee settlements leaders and student leaders. #Rhinotalks aims to raise awareness, explore and develop strategies for mitigating the existence of hate rhetoric among South Sudanese refugees and asylum seeking communities in Uganda.

The Rhino Refugee Camp Settlement is located in Arua District in northwestern Uganda on the outskirts of the country’s largest game park, and has been the “temporary” home to over 55,000 refugees, predominately from South Sudan.

The event is an action to widen the campaign against online hate speech, with the focus on involving stakeholders and influencers by engaging them to discover their personal roles in mitigating online hate speech. #Rhinotalks also aims to create a series of resolutions to better counter social media hate speech.

#Rhinotalks was organized by the Community Development Centre (CDC-Uganda), a community-based organization focused on building strong and resilient societies, as part of #defyhatenow diaspora outreach program at Rhino refugee camp.

The event was attended by over 28 participants from civil society organizations, CBOs, Journalists, Youth Groups and  Students from Rhino Camp settlement.

The participants discussed ‘ What is Hate Speech?’ and examined the role of hate speech in the South Sudan Conflict through personal stories. Focusing on the roles of the stakeholders in mitigating hate speech, peace building, and reconciliation was part of the advanced sessions and the unconference group interactions.

#RhinoTalks attracted the interest of media houses from South Sudan, with Radio Miraya conducting an interview with CDC’s Development Desk Officer, prerecorded and played on the 14th June at the Talks Event. Listen to Radio Miraya Interview

South Sudanese in Uganda Call for an end to hate speech

“South Sudanese in Uganda call on social media users to stop spreading hate speech in search for peace, reconciliation, unity and development.
They criticize that continued circulation of hate speech resulting from sharing baseless rumours about incidences in South Sudan create hatred and disunity, Radio Easter reports.
Students and different stakeholders from civil society and community based organizations participated in the dialogue.
The discussion was entitled: Rhino Talks with the goal of “creating awareness and shared activism against inflammatory speech and direct incitement to violence”.
Bugema University student, Riak Michael, says South Sudanese should not be quick to spread unclear information. He adds that he learnt skills to identify, analyze and counter information that carries hate speech.
Johnson Poru, a student of Makerere University, Business School, adds that he will “responsibly share” with students and online users’ positive messages that promote peace.”  (Catholic Radio Network – Read full article)

“I have learned to promote peace on social media “Eric. J. Moses

“I have to speak up and share responsibly” says Andrew Lasu , #defyhatenow #RhinoTalks

What is South Sudan if we are divided?

I am Maura Ajak, I report on gender-based violence in South Sudan
Scroll to top