Blog - Latest News
You are here: Home1 / #defyhatenow Focus Area2 / Social Media Analysis, Monitoring and Citizen Data3 / The Online dominance of alternative media and how it contributes to mis/disinformation...

In South Sudan’s current developing media landscape, social media has become a national phenomenon and can be considered a mutiny to the news environment. This is because various users create their own content and curate the flow of information differently for public consumption.

According to the Digital 2021 South Sudan Hootsuite report, in January this year, there were 900.7 thousand internet users across the country. Between 2020 and 2021, the number of internet users increased by 13 thousand (+1.5%). This increase according to technological experts can have both negative and positive impacts.

Several other kinds of research reveal that social media has extended beyond everyday interpersonal communication and ‘life-sharing’ to the (quasi-journalistic) gathering and sharing of news information. The ease with which information is published and shared online challenges the long-established connection between the press and society, with journalists playing a mediating role as gatekeepers.

In addition, the possibility to comment, like, share, and follow news online has increased audience involvement with the news. For example, people, especially the young, increasingly get the most unverified and fact-checked news through social media – interactions that are habitually geared by Alternative Media.

As news circulation increasingly takes place through social media like Facebook and Twitter, which are regularly used by South Sudanese abroad and a few within the country, online sharing and discussions can create widespread mis/disinformation on certain issues or actors. Numerous researches reveal that when news spreads across social media, this increases attention to the story, ultimately influencing the (online and offline) public agenda.

In order to deepen and analyze South Sudanese online interactions on Alternative Media’s planetary, especially on how they handle their stories, #defyhatenow – Africa Fact Checking Fellows have been monitoring their various Facebook pages and Twitter handles.

Below are some of the few examples of mis/disinformation related stories that were poorly handled by the mentioned particular alternative media houses.

The story was refuted by the Office of the President:

This story that had created vast debate online turned out to be false. According to their comments, many online users believed the information. But after the widespread, the Office of the President in a late manner dismissed the fake news. 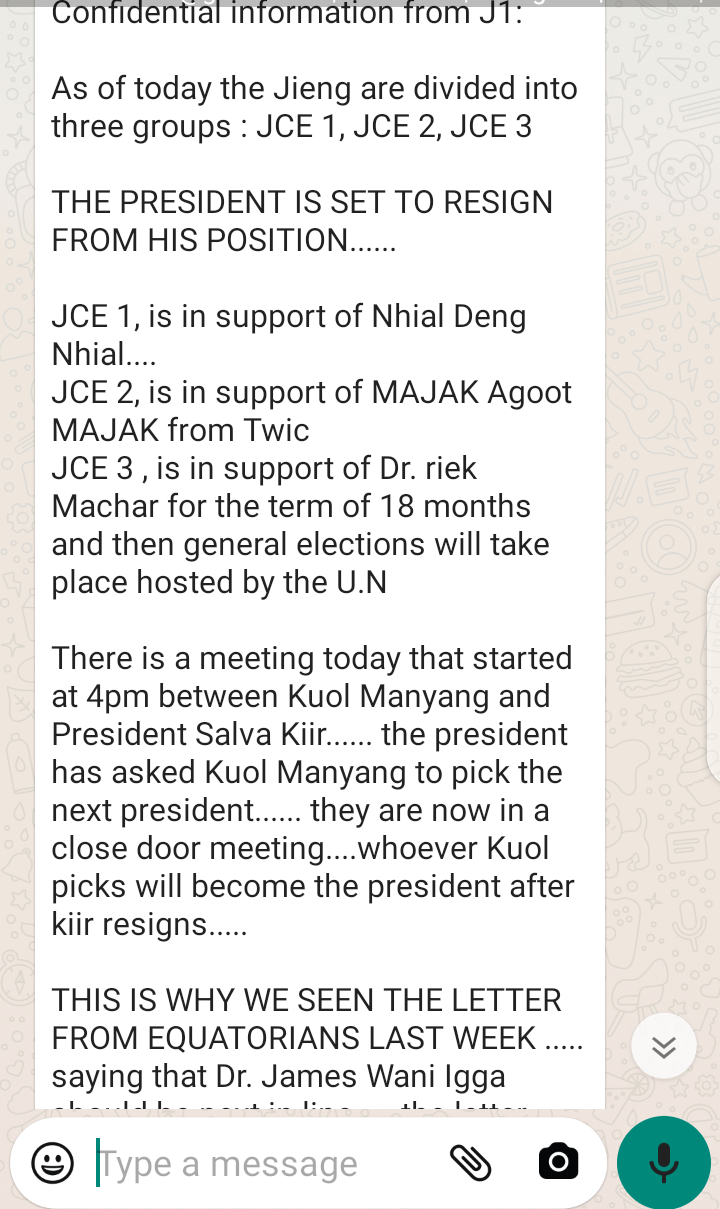 As seen in the above screenshot, a message circulated on various WhatsApp groups stating that the President was set to resign. According to our analysis, this story could have likely caused divisive politics, hence triggering conflict in the country. But it was later fact-checked and found to be untrue – a move which reduced the anticipated panic.

After thorough research and fact-checking, we discovered that the story was actually a modification of a post made by the same person that a South Sudanese boy was killed in Egypt. The individual merely changed Egypt to Uganda. This is an example of unhealthy news that can negatively affect South Sudan’s relationship with its neighbours and may harm Ugandans in South Sudan.

Find the link to the story fact-checked by 211 Check.

Late last month, Awut Deng Achuil – General Education and Instruction minister issued a statement regarding the final fate of the primary national exams. In the statement, she mentioned that due to insecurity, students in opposition-controlled areas of Jonglei, Upper, Unity States and some government areas (Warrap) would not access the national exams, but this story was misreported by some Alternative Media, which created online wrangles filled with mis/misinformation.

Its negative implications left the civil population to wonder whether peace parties were truly in a unity government if they are not able to coordinate amongst themselves. It was taken as a political rivalry between the SPLM-IG & the SPLM-IO. However, the students later sit for their exams after a number of engagements.

During the monitoring period, the leading stories included:

In order to mitigate the spread of rumours, claims, fake news and misinformation related content online by the Alternative Media, the following should be done by the relevant authorities.

Physical and cyber bullying, an underlying errant affecting many in silence
Scroll to top