You are here: Home1 / Campaigns2 / #PeaceJam

A #PeaceJam is an informal community oriented peacebuilding event, process, or activity where people – youth, cultural actors and anyone interested in peace and cultural dialogue – get together to share their ideas, visions and hopes for the future – and to make new friends and connections.

To “jam” for peace is to improvise peacebuilding without extensive preparation or predefined arrangements, but to develop new ideas and ways of doing things spontaneously with the energy coming from the creative interaction of the participants.

Over the years , we as #defyhatenow have organised and participated in the International Day of Peace on 21st Sept through #PeaceJam. 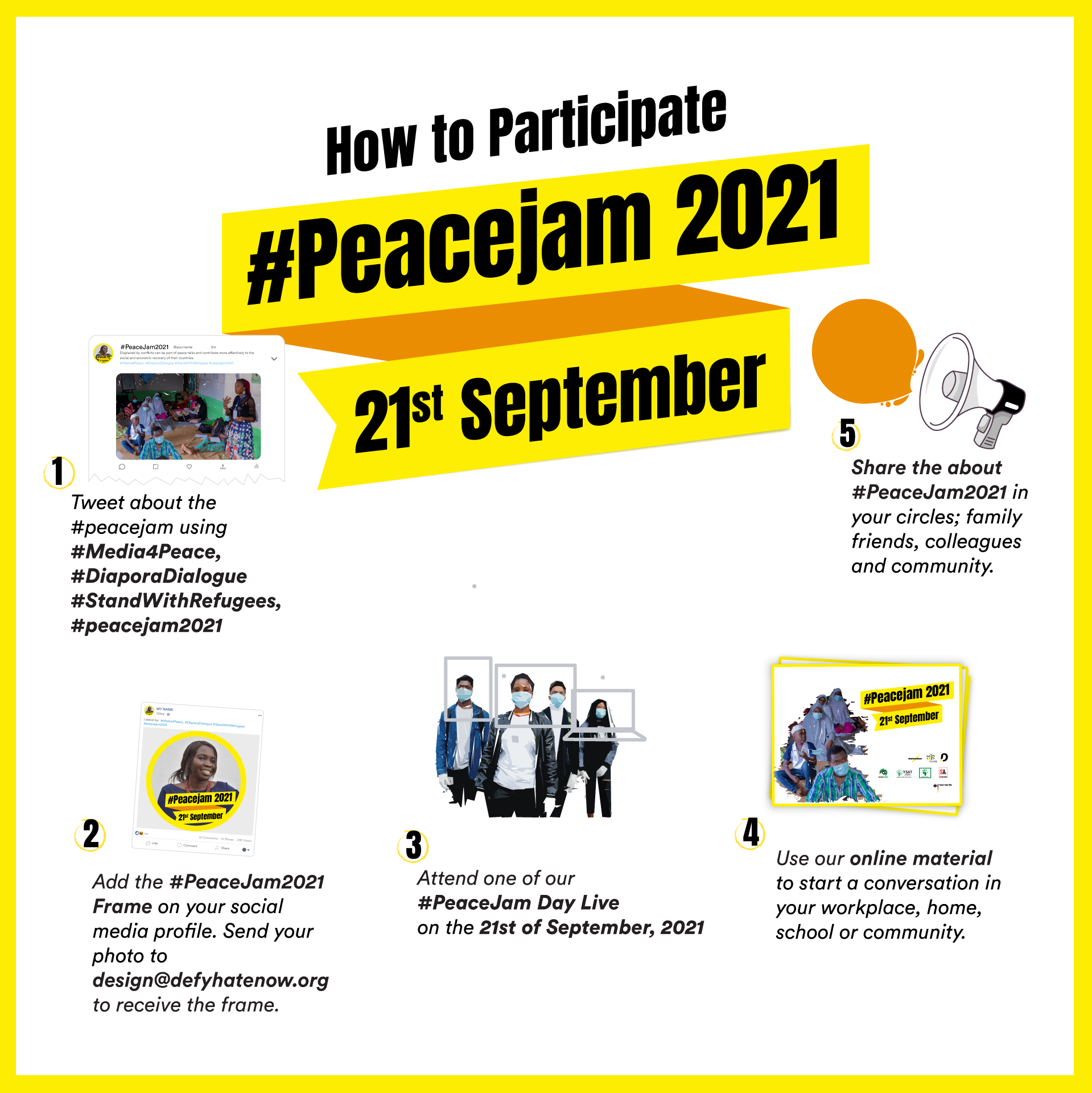 We invite you to jam for peace with us from wherever you are in the world, engage us in our various conversations through social media. And remember to join us on the 21st September 2021 in a live online session.

Planned activities including days leading to and during the event are:

The project, sought to redress the status quo and attain its goals through a series of activities that took place in a period of 3 hours in an online interactive session on the event of #defyhatenow Peace jam 2020 on the 21st of September 2020: International Peace Day, themed, ‘Shaping Peace together’. Planned activities included activities on the days leading to and after the event. 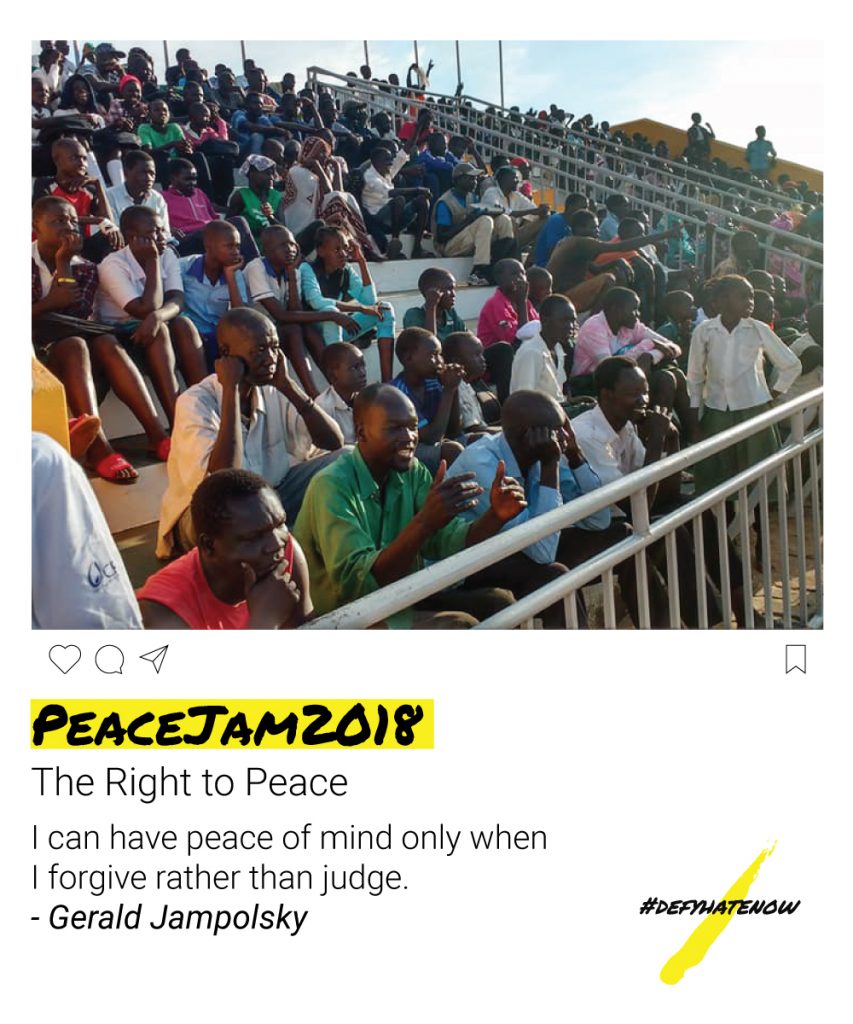 Activities that culminated the #defyhatenow #peacejam18 online and offline were;

In conjunction with UN Day of Peace today, September 21st, the #defyhatenow initiative against online incitement to violence in South Sudan is holding a social media #PeaceJam17. Join us and take part in One Billion acts of Peace today.


Events are taking place all day both online and live in numerous locations in South Sudan, as well as globally including Kenya, Uganda, Sudan, Canada, and Japan.

#PEACEJAMRHINOCAMP: Yoro playground in Rhino Camp will be the central event location. 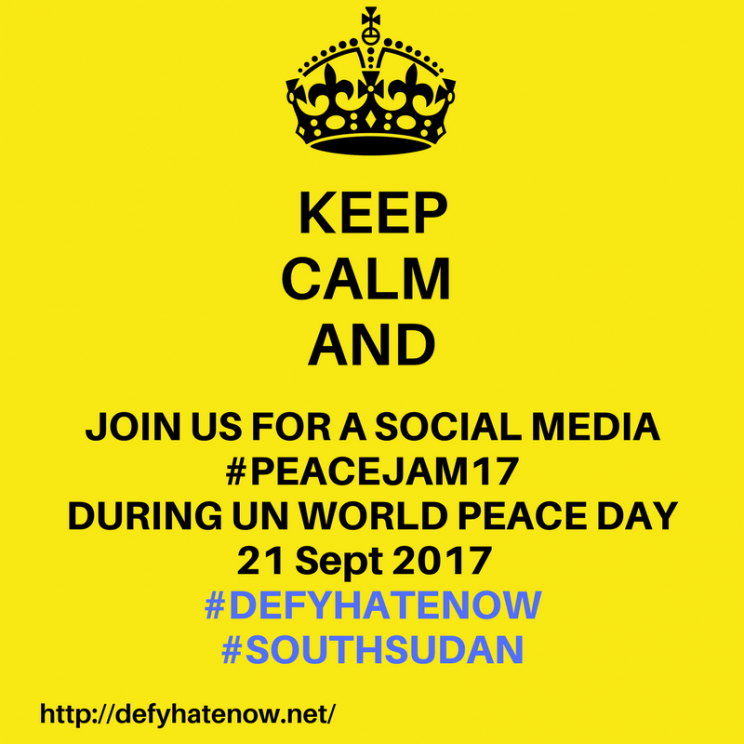 Selected events include traditional youth dance, street theatre and workshop in Juba; The Rhino Camp #PeaceJam (Arua, Northern Region, Uganda) which aims to reconnect south Sudanese Refugees in Uganda through an open interaction and workshop based event. Following the recent escalation of violence in south sudan majoring in towns like Yei, Wau and Yambio of the former western Equatoria state there has been an increasing rate of refugee influx to Uganda, South Sudan’s neighboring country; Diaspora meeting to #peacejam in Edmonton, Canada; Social media awareness and peace message workshop at The Hub, East Africa in Nairobi.

On UN International Day of Peace, the #defyhatenow initiative by r0g_agency, brought together community groups, activists and peacebuilders at the Intra-Africa hotel in Juba for a social media “peacejam”.

#jubapeacejam was an invitation to actively make South Sudan’s voice heard above the rhetoric of hate, violence and intolerance. Celebrating unity and independence, together we can take a stand against the forces ripping communities, friends, families and cultures apart.

Where social media has increasingly been a place used to stoke the flames of conflict, setting neighbours against one another, #jubapeacejam brings the builders of peace, dialogue and South Sudan’s unique, rich cultural diversity together.

Some thirty activists gathered for this first ever ‘social media peace jam’, including participants from peacebuilding organisations and projects such as Sawa Shabab, FreeVoice, Vistas / USAID, CNHPR, Internews, as well as IDP children from the Confident Children Out of Conflict (CCC) programme.

#jubapeacejam works across as many channels and platforms as possible to bring online groups together, create slogans, exchange information, ideas and create new communities.