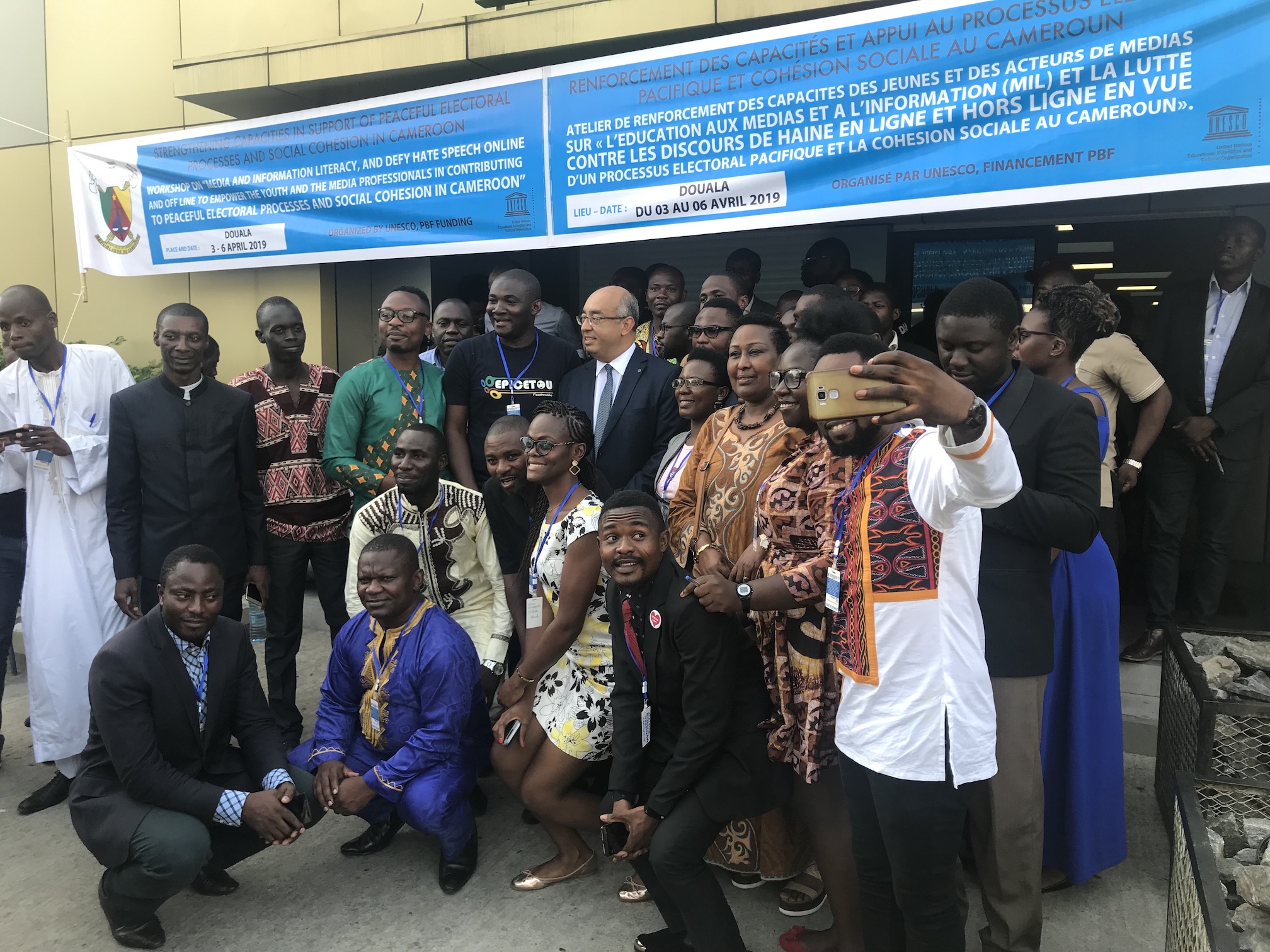 This workshop aimed at mapping out current challenges and creating strategies to tackle the difficulties encountered by the young information consumers in Cameroon. It focused on how to cultivate the skills needed for creating a healthier and safer online experience devoid of violent extremist ideologies, hate speech, misinformation, disinformation and fake news.

The breakdown in social-cohesion in many regions of Cameroon has taken place at a time of increasing socialization embedded in information and communication. The security context and the atmosphere of the Presidential Elections held in October 2018, on the one hand, and the forthcoming parliamentary, municipal and regional elections, on the other hand, is marked by an increasing expansion of ethnic polarization, hate speech, radicalization and extremism occurring both offline and online. Online hate speech, propaganda, incitement to violence, and threats are posted and shared by key players (influencers) amongst social media groups and on timelines.

Therefore, it is relevant to create conditions that make it difficult for violent extremist ideologies to proliferate and to develop the resilience of learners, especially young people, to violent extremist and hate messaging, through the capacity building of youths and the launch of a #DefyHateNow campaign.

The training was based on a participant  centred approach that emphasizes on the need for the participants to interact with each other and actively  contribute in the exercise sessions in order to gain an understanding of the content and know more about other participants.

This method is anchored on the assumption that most participants have a good and relevant experience working in the areas of Media, political parties, youth engagement , blogging and  Social Media.

The focus areas for the workshop were:-

Day 2: Building framework and synergies, to narrow your focus on pressing issues to be handled through #defyhatenow campaigns. Help participants understand their individual and organizational role in tackling hate speech and radicalization

After holding discussions and debates for the three days, here are the outcomes our participants committed to the following :-

The team agreed to work on a nationwide campaign that utilizes the media in all forms (Print, radio, TV and online blogs) to do voter education and work on a joint framework for early warning in cases of hate speech and fake news during the election period.

Artists of different forms came together to brainstorm on creative ideas that can be used to engage the public in hate speech mitigation activities. The participants were able to come up with a short video on hate that has been viewed more than 10,000 times so far.

A vital part of the training was on amplifying change and creating a chain of positive actions that will lead to a #HateFreeCameroon. Ideas suggested included  hate speech mitigation campaigns, and outreach to youth and political groups to create awareness on hate speech and its effects on communities. More importantly, the participants thought of ways they can use their institutional powers (media house, political parties, NGOs, etc.) to create changes within these organizations, and also among their followers.

The focus was on how to work with communities to create hate speech mitigation activities in remote areas and for people with low or no access to the internet.

One major suggestion included an action plan to work with a group of schools in order to create peace clubs, these clubs meet on a weekly and monthly basis to be mentored by some of the local activist and peacebuilding partners who are supported by UNESCO.

The team committed to drafting a hate speech legislation that will aim at clearly defining hate speech and creating a reasonable framework for lawful procedures to be taken against propagators of hate speech in Cameroon. The group also aims to work on a creative mechanism to advocate for this law by creating awareness among the public, and lawmakers, on the importance of hate speech mitigation as a means of creating harmony and peace among the population and between the various political actors.

One of the big ideas that emerged from this group was to create a hub that focuses on gathering youth, technologists, and peace practitioners to work on hate speech mitigation and peace building using tech tools. The idea was named Djam Hub. The group aims at creating three Djam Hubs in Cameroon with future aims of expanding it to most regions of Cameroon.

#defyhatenow is grateful for UNESCO’s partnership in this project.

DEFY the Film has received 5 awards at the Juba Film Festival this year.